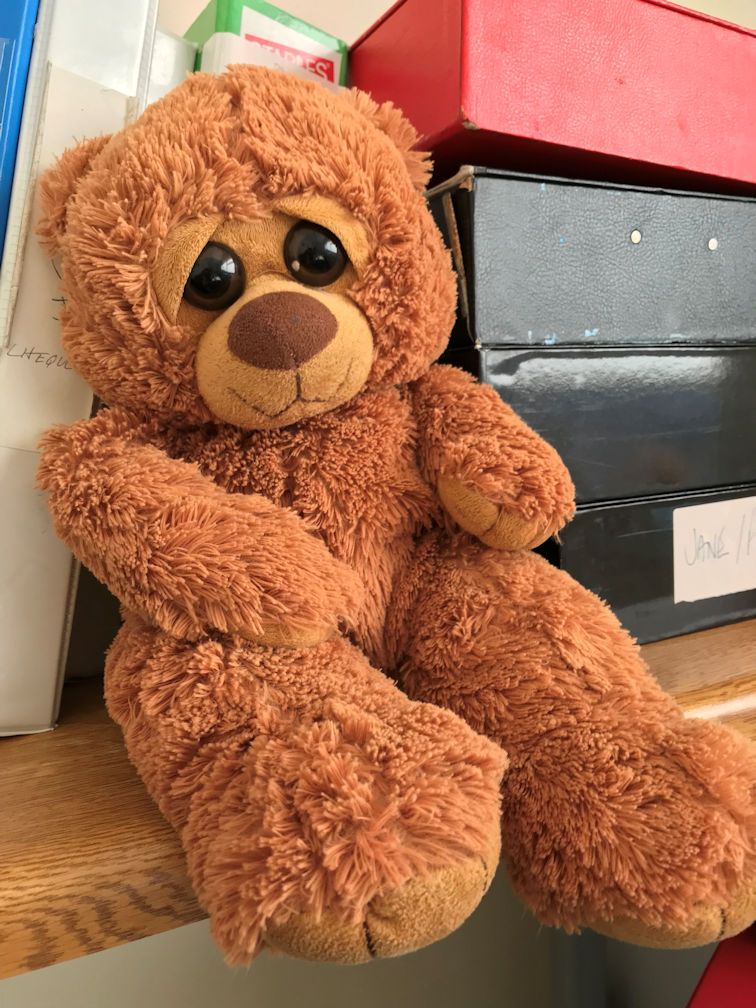 Ramblings Of An Old Spice Bear - Chapter One

Hi. I am a Droopy Eyed Spice Bear (not a Spice Girl) and I am on the shelf !

I sound as if I should be participating in a self-help group or (for the Baby Boomers among you who will remember this) a looking-for-love candidate on our late Cilla’s Blind Date TV series.

But I am neither of these - I have quite literally been left on the shelf in the offices of teddy bear company Be My Bear in wild Wales – the land of song, red dragons, daffodils and leeks.

Talking of leaks – I am able, from this vantage point jammed between files and reams of paper, to see some patching up being done on the roof after a wild night of wind and horizontal rain. It is at night that I am at my most lonely with all the staff gone, the lights out and nothing to look forward to until the morning when I run the gauntlet of being sprayed with Pledge by an over-enthusiastic cleaner. And It was as I contemplated the long hours ahead of me through the light of a super moon last night that I decided I would begin my blog – a Bear’s Eye View of the World and make my mark as the last surviving member of my species.

You see I am the teddy bear equivalent of the last dinosaur – I come from a long lineage of distinguished Droopy-eyed Spice Bears hailing from the Far East – our detractors would argue that we were not the most aesthetically appealing – a surgical lift or botox would have corrected the droop - but we had pawfuls of character and charm which made up for our minor flaws. Then last year out of the blue the fat cat suppliers decided to discontinue our line. No discussion, no right of appeal but part way through a production run in a factory just north of Shanghai our gene pool was arbitrarily drained. Fortunately for me and a few hundred members of my family we were already in transit squashed into boxes in a 20 foot container making the arduous sea-crossing of 9,155 km from China to the UK.

I should explain that the factory gods who create us don’t know the expression “Get Stuffed” – so we have no filling or soul – we are mere skins until a child or adult experiences the magic of bringing us to life – we are stuffed and fluffed, brought to life with a wish upon a star charm which goes into our tummy – we call it our soul – zipped up, given a name and a bear hug and then technically we are OFFICIALLY born! They have literally made a friend for life and we are then loved and cared for by our new owners and live happily ever after if we’re lucky.

But of course my luck ran out – which is why I ended up on the shelf and not in the arms of a doting little boy or girl. So back to our journey to infinity and beyond as Buzz would say – only our “beyond” destination was the Be My Bear warehouse in Wales – we had travelled from one land of the dragon to another.

There was though, great excitement as we were unloaded on the final leg of our journey anticipating our futures in lovely new homes full of arctophiles (look it up – I had to ! )We said our fond farewells as one by one our boxes were opened and we were mailed out via Royal Mail or courier to our final destination. But my number didn’t come up – for some reason as the last Droopy in the last box I was never sold – just stuffed and put on the shelf as part of the office furniture.

I blame the Boss at Be My Bear – her name is Pippa and in the winter she wears a fur coat – I have heard her say it is faux fur but so am I and I don’t like the idea that she may one day use me to patch hers up. She calls herself the Bear Lady which humans seem to find very funny but she reminds me a little of Cruella De Ville so I can’t see the humour in that.

Dawn is the manager and she is very jolly – she laughs a lot and likes chocolate and cake. She lives a long way from the factory in a place called Blaenau Ffestiniog which is full of slate mines and sheep. I have heard them talking about a secret slate quarry called Manod that housed all the art treasures from London during the Second World War - now it has a new reputation for adventure sports with zip wires over deep caverns and underground trampolines– but I think Dawn prefers eating chocolate and cake.

Next come Nicola – although they call her Nic – and I can see her best of all from my shelf. I sometimes try and catch her eye with my droopy eye but she never looks my way. Sometimes we hear a spine-chilling scream emanating from the warehouse – I nearly fell off the shelf the first time I heard it – I was convinced there had been a murder and was contemplating how I could raise the alarm – but it was only Nic – she had seen a spider – she is an arachnophobe – I like that word – and can’t even look at a picture of a spider without being overcome and falling down in a faint.

Next door to the general office is a lovely warm sanctuary which is Robert’s lair – he does all the IT work at Be My Bear and spends most of his day on the computer – he comes out from time to time and then goes back but I don’t get to see him much. I do know that he likes Pumpkin Pie, Thanksgiving and all things American - I always think that’s fortunate because he is married to one.

There are two pickers and packers Maggie and Amy who work in a separate section and they are responsible for getting the bears and other animals ready for delivery to their new homes. Maggie likes singing and bananas and for some reason she often sits cross-legged on a desk or the floor – she rarely uses a chair - I would love to be able to do that but my legs just dangle and I often get night cramps which does nothing for my health and temper. Sometimes I don’t recognise Amy – she wears her hair in different ways so she looks like a different person altogether which always confuses me. She says her whole life is on her phone – I sometime worry she might lose her life on account of that phone because she walks to work texting and sometimes she crosses the road without looking up.

I think Cruella might be upset about that because she would have to find someone new to work for her !

Well as Loony Tunes’ Porky Pig would say “ That’s all folks “ till my next blog.