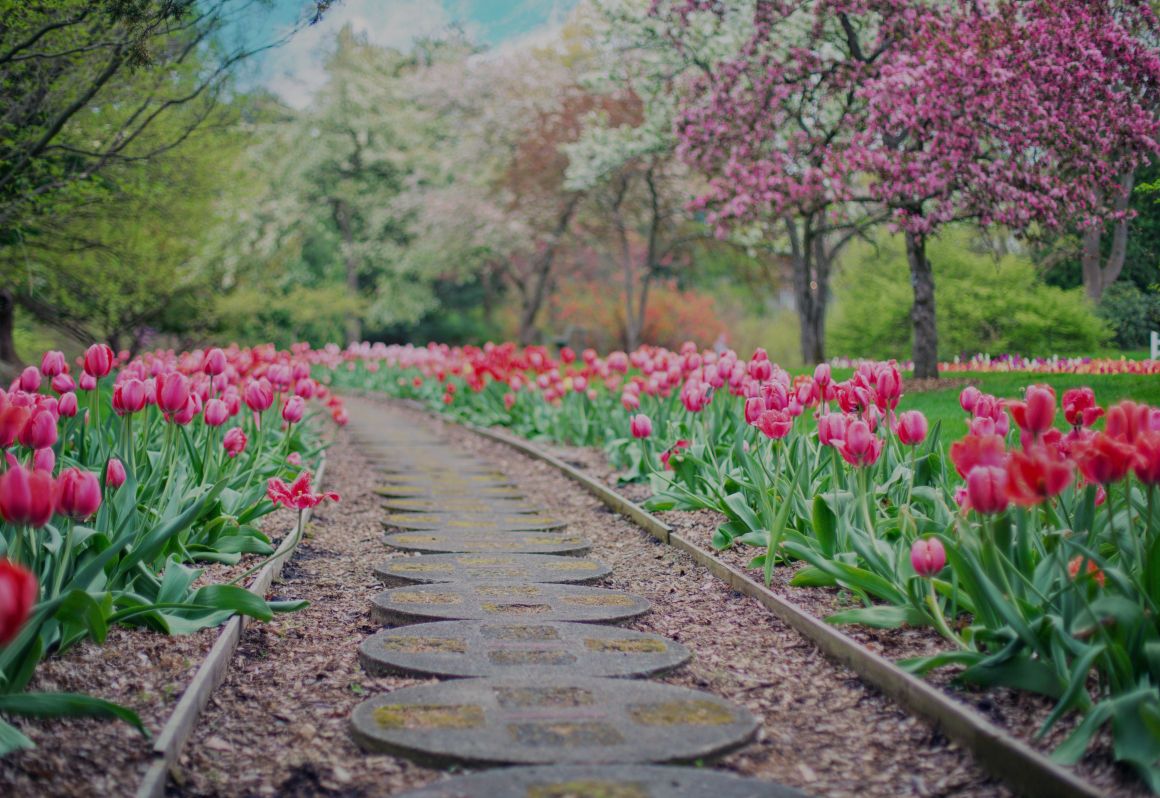 Get Cracking This Easter

Sunday is my day of rest from MPs. It goes without saying we all want a breather from the current chimpanzee tea party politics but for once I’m not talking about Members of Parliament but... Mobile Phones.

I have just taken up the celebrated TV doctor Rangan Chatterjee’s advice in his simple Four Pillar plan on how to eat, sleep, relax and move – and have given up all my electronic devices – but only on Sundays.

As I write this my world is still intact, no implosions, no feelings of global isolation or digital withdrawal symptoms - just a few extra e-mails and texts to catch up on and a feeling of satisfaction that I have managed to live for a full 24 hours without a right hand electronic extension. That is not to say that I was not disturbed by other users - a pub meal on Sunday ended with a head count of diners who were engaged not in conversation with each other but with digital friends. It was right across the age spectrum from teenagers to pensioners, from mums and dads to kids, each one engrossed in their own individual electronic worlds and seemingly disconnected with the physical others.

It got me thinking about my pre-internet childhood where spare time was spent outdoors creating dens and indoors creating Blue Peter style treasures out of Fairy Liquid bottles and sticky backed plastic. I trawled nostalgically through my old Ladybird books which my children adored and which I hope my grandchildren will also enjoy when the time comes and came across the “What to Look For” series of nature books. They are priced at 2 & 6 pence (30p in today’s money) and illustrated by the great wildlife artist Charles Tunnicliffe, whose original works have a permanent home at the Oriel Ynys Mon Gallery on Anglesey not far from Be My Bear here in Mochdre.

The “What to Look for in Spring” edition starts with an introduction to each month - April is described as the month when “windows can be opened again and hedgehogs and dormice can end their hibernation and enjoy the sunshine. With Spring comes the greatest wonder of the year.” 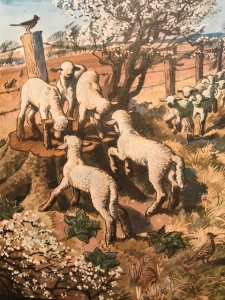 Well I have opened my windows !! but I have not seen a hedgehog for at least 10 years and never a dormouse. Tunnicliffe’s illustration for April shows lambs gambolling in a field of drifts of white blackthorn watched by a skylark intent on finding a location for its nest. It was first published in 1961 but more than half a century on the fields are still full of gambolling lambs, the blackthorn is in full flower and the skylarks are pairing off and starting to nest build. What has changed is our attitude to nature’s changing seasons - absorbed in our own digital worlds how many of us take regular time out to enjoy the benefits of the natural world – and all for free.

A walk in the countryside or by the sea costs nothing yet is hugely beneficial on so many levels particularly if you discard the mobile before donning the wellies – and then there is no temptation !

And even if April showers keep you indoors, there are plenty of activities to occupy the kids without having to resort to internet based pursuits.

Another trawl through my childhood books revealed several art and craft books with suggestions of what to do and what to make on rainy days.

So with Easter round the corner here are some arty crafty ideas to keep the family entertained on device-free days. It’s amazing what you can conjure up with pipe cleaners, bottle tops and card - the only downside is you will have had to use a device to access my digital free tips. Still working on a way round that one !!!!

To make your Easter Rabbit you will need:

Cut two circles from thick card each about 76 mm across. From the centre of each cut a smaller circle (about 25mm) across. You could always draw around a suitably sized circular object if you are struggling to draw a circle or use a compass (if health and safety guidelines allow !!)

Place the card rings together. Then take the wool and wind it over and over the rings until the hole in the centre has been filled up. Snip around the edge of the ring with sharp scissors. Pull the two card rungs slightly apart and tie with a length of wool as shown. Remove the card rings and fluff up pom pom. Trim if necessary. You can always make a small and a large pom pom and tie them together to form a body and head. But for our rabbit we are going to make a pom pom head, and use a toilet roll tube for the body. 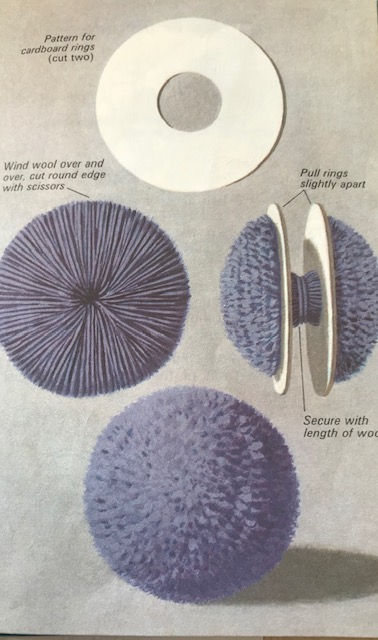 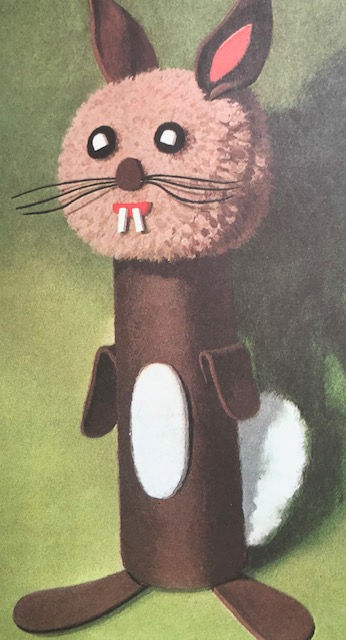 To make your Easter Chick card you will need.

Fold the card to required size. Draw a chick pattern onto the card and colour the chick in yellow. Make sure you are left with a folded edge between points A and B as shown. 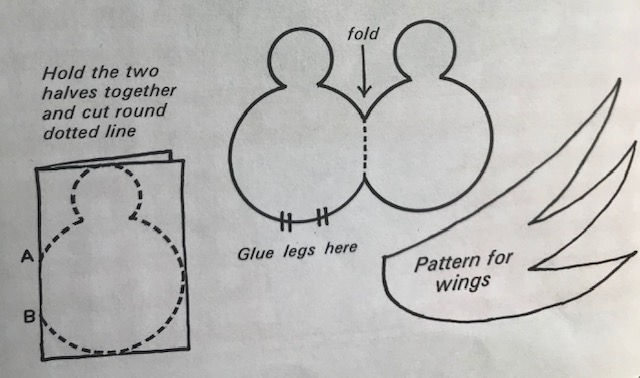 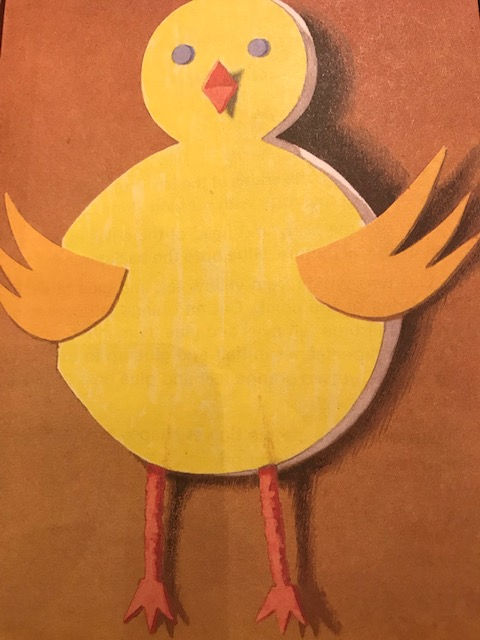